We are pleased to announce that the limited edition 2015 $1 WWI War Heroes Colour Coin featuring the red poppy motif is now available to order from Downies! 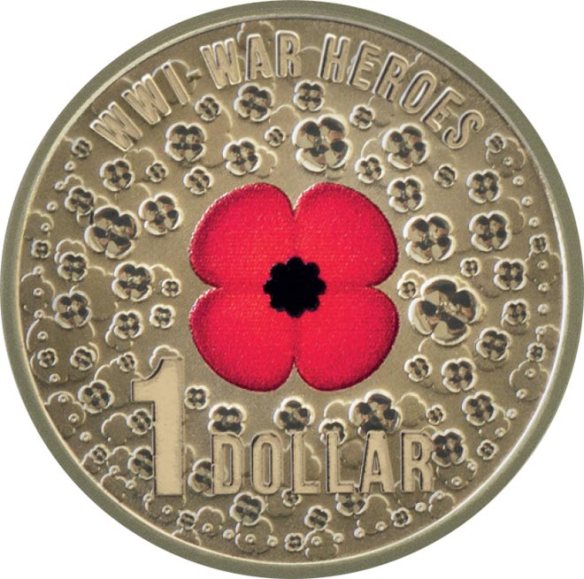 This official Australian legal tender coin was originally part of a promotion that saw fourteen 20 cent coins made available to the general public through newsagents over a two week period. The colour $1 coin was initially released exclusively to News Corp subscribers, and we were therefore surprised to learn that we would be soon receiving an allocation of the coin from the Royal Australian Mint. Thus, we are now able to pre-offer this exclusive $1 coin to the broader Australian collecting public.

This spectacular $1 coin features a poppy field design with a large central poppy motif rendered in an eye-catching red hue. At the top is the inscription ‘WWI – War Heroes’, while at the bottom is the coin denomination of ‘1 Dollar’. On the obverse side is the effigy of Her Majesty Queen Elizabeth II, designed by Ian Rank-Broadley. Like regular one dollar coins struck by the Royal Australian Mint, the War Heroes coin is made from Aluminium-Bronze and measures 25mm in diameter. Unlike other dollar coins however, this colour release has been struck with a ‘frosted’ appearance, and only 13,500 coins have been minted for distribution worldwide.

Whilst we have received confirmation of our allocation from the Royal Australian Mint, the nature of the News Corp promotion means that a fixed date for delivery of the coins from the RAM has not been confirmed at this stage. We are expecting, however, that delivery from the RAM will take place by early June. We will be sending an email notification to those who order this coin as soon as we receive a firm delivery date.

Shrewd sellers who managed to get their hands on the coloured $2 Lest We Forget coin are cleaning up on eBay as demand for the coin sends prices skyrocketing.

Within hours of the coin being unveiled on Sunday April 19 at a special event hosted by the Honorable Kelly O’Dwyer MP at the Stonnington Cricket Oval, listings on eBay began appearing, offering the coin for auction.

Perhaps fuelled by the enthusiasm of collectors and the general public alike to own one of these unique colour commemorative coins with a mintage of only 1.5 million – coupled with the knowledge that the Royal Australian Mint would not be offering an official Uncirculated version of the coin – auction prices for both individual coins and security bags are realising profits of between 1500%-4900% above the face value of the coins themselves. A veritable bonanza for the sellers but an excessive amount to pay for unwary buyers.

It’s unclear where these eBay sellers acquired their colour $2 coins for sale. Some speculate they work in banks or security firms that delivery currency to banks, while others believe they were just lucky to be amongst the first to find the coins in their change. Either way, they are finding a not-to-be-sniffed-at financial reward by listing them quickly on the online auction site, as impatient buyers clamber to be some of the first to own the new commemorative $2

The 2015 Lest We Forget colour $2 coin was issued to commemorate the 100th anniversary of the Gallipoli landing. It is the 4th coin of colour to be issued into circulation after the 2012 $2 Red Poppy, the 2013 $2 Purple Coronation and the 2014 $2 Green Remembrance Day coins. The 2012 Red Poppy coin was distributed to the public through the RSL, while the other coins entered circulation via the Reserve Bank of Australia.

This coin sold for 4900% above its original face value

As more of these coins make it onto the secondary market the prices being reached on eBay will undoubtedly fall, so if you’re looking for a more reasonably priced colour $2 we recommend being patient. eBay listings for the 2013 and 2014 colour $2 coins are still plentiful, 1-2 years after the coins were originally released, so there is no doubt the 2015 Lest We Forget coin will be popping up on eBay for years to come also.

Downies are currently looking to source these coins to offer as well, and if we are successful we will notify customers through our online newsletter, as well as our Facebook and Twitter pages.

Otherwise, keep a close eye on your coinage because you never know when you might find one of these coin in your change. If you do find one feel free to post a photo of it here or on our Facebook page.

*prices listed at time of writing this article

The design for the new 2015 Lest We Forget colour $2 circulation coin has been revealed today at a special ANZAC Commemoration Ceremony held in Melbourne. The event was held at the Malvern Cricket Ground in Melbourne’s inner east, hosted by the Honorable Kelly O’Dwyer MP (Federal Member for Higgins & Parliamentary Secretary to the Treasurer) and Cr Melina Sehr, Mayor of City of Stonnington and featuring a number of other dignitaries. 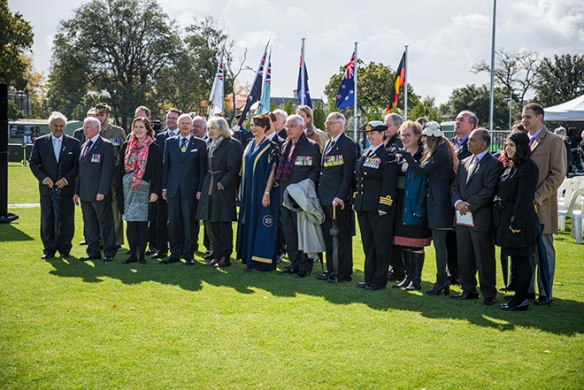 Scroll down to see more photos from the Anzac Ceremony, including the $2 Lest We Forget Colour Coin

Hundreds of people braved the temperamental Melbourne Autumn weather to attend the ceremony which stared with a march from Malvern Gardens, up High St and finished at the Malvern Cricket Ground. Around the grounds were tents for various local entities such as schools and businesses, as well as Kelly O’Dwyer’s mobile office which had on display one of the $2 colour commemorative coins due to enter circulation from tomorrow. 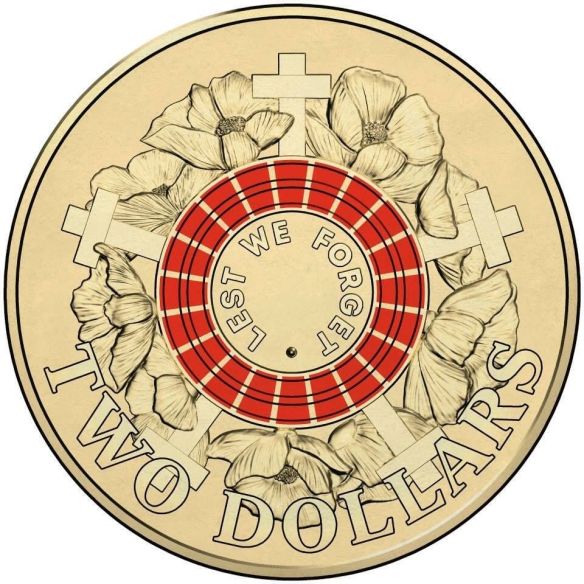 The coin features red stripes in a circular pattern in the middle, framing the words “Lest We Forget”, with a design around the coin consisting of 5 crosses among a ring of poppies. In the bottom portion is the coin denomination of Two Dollars.

Unlike previous colour $2 coins issued into circulation, the 2015 Lest We Forget $2 coin will not be available to buy in Uncirculated condition through the Royal Australian Mint. Approximately 1.5 million coins will begin to be released into circulation by the Reserve Bank of Australia as of tomorrow, Monday April 20th, although it may take several days or even weeks for them to be fully released.

However much like previous colour $2 issues, there is little doubt that due to the poignant nature of the commemoration and sheer difference in design of these coins from the regular $2, people will hoard them away instead of spending them, making them quite hard to find in a short space of time. The same has happened with the 2014 $2 Remembrance Day Green Colour Coin, the 2013 $2 Coronation Purple Colour Coin and the 2012 $2 Poppy Red Colour Coin. The latter being distributed through the national RSL Red Poppy Appeal rather than through the Reserve Bank of Australia.

Canada is the only other country to have released colour coinage into circulation – and this is only the 4th Australian circulating coin to be issued in colour – making this a significant commemoration of the ANZAC Centenary as we approach the 100th anniversary of the battle at Gallipoli.

So keep your eye on your small change over the coming days and weeks and if you find one of these colour commemorative $2 coins be sure to post a picture below or on our Facebook Page.

More photos from the Anzac Ceremony

Although April the 25th and November the 11th are perhaps better known, November the 1st is one of the most important dates in Australian history. It was on November the 1st 1914, exactly 100 years ago this Saturday, that Aussie soldiers began the long voyage from Australia to fight for King & Country in ‘the war to end all wars’.

The last piece of Australia seen by most of the original AIF volunteers as they set sail to war was Albany – the town on the Western Australian south coast from which the huge troop convoy embarked on the 1st of November 1914. For many of the men, it would be the last of Australia they would ever see. Viewed by many as the first chapter of the Anzac Story, and, indeed, the birthplace of the Anzac Spirit, Albany is once again the focus of national attention. 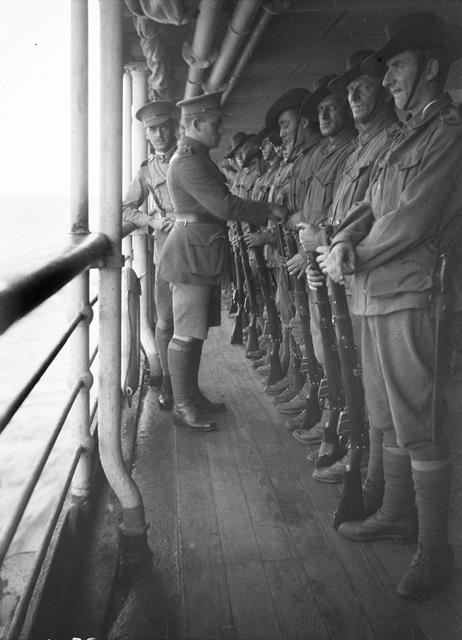 A guard of the 5th Battalion on board A3 HMAT Orvieto, 1914. Source: anzaccentenary.vic.gov.au

The 100th anniversary of the departure of the first AIF convoy from King George Sound is naturally being honoured, with a wide range of commemorative events to be held in Albany this month. A Naval Ship Open Day; a community concert with the West Australia Symphony Orchestra; an historical light & sound show; Anzac projections & storytelling; musical & choral school performances – and much, much more.

Indicative of the importance of this major anniversary, a wide range of commemorative coins have been launched, giving all Australians the opportunity to pay homage to those who served the nation with such distinction during the 1914-18 First World War.